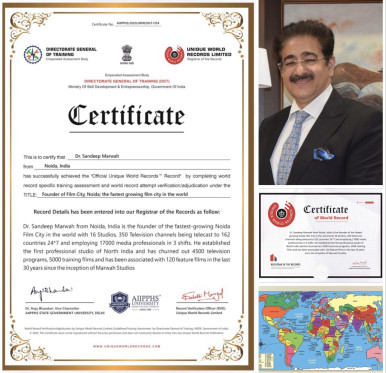 The record reads – “Sandeep Marwah is the founder of fastest growing film city Noida in the World with 16 studios hosting 350 Television Channels being telecast to 162 countries 24 by 7 and employing 17000 media professionals in 3 shifts. Dr. Sandeep Marwah is the founder director of Marwah Studios the first professional Studios of North India and has churned out 4500 television programs 5000 training films and has been associated with 120 feature films in the last 30 years since the inception of Marwah Studios,”

“I am so thankful to the management of UWR. I feel so honored and charged with new energy by this gesture of Unique World Records. I am sure Noida Film city will do better in the coming times,” said Sandeep Marwah the founder of Noida Film City.