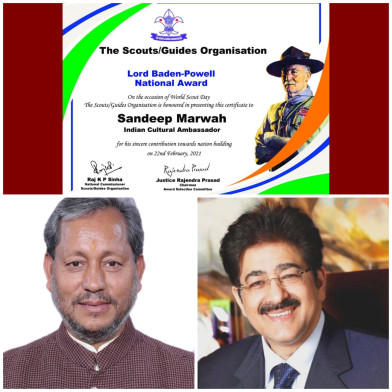 New Delhi: The youngest uniformed body of the Republic of India that is Scouts and Guides Organization honored Dr. Sandeep Marwah with Lord Baden Powell National Award- as the first Indian Cultural Ambassador for his untiring contribution to the promotion of films, television, media, art and culture of the country to rest of the World.

“It is very rare to find people like Sandeep Marwah who have devoted his life in propagating, high lighting Indian art and culture to the people of World. His involvement with millions of people from probably all the countries of the World through different mediums have added a lot to the promotion of our culture. He is entitled for best of the awards and huge appreciation. I have seen him working nonstop for years together,” said senior BJP leader and former Member Parliament Shri Tirath Singh Rawat now 9th Chief Minister of Uttarakhand.

A certificate and an award were presented to Sandeep Marwah in a virtual conference on the International Scouts Day fall on 22nd February. Earlier Dr. Sandeep Marwah was bestowed upon as the Best Citizen Award by the same organization.

“I am thankful to the chief Guest Shri Tirath Singh Rawat ji and the promoters of Scouts and Guide Organization for considering me for this most valuable award. I respect their gesture and assure you that there will be no compromise in my work. I have been motivated enough to work further and take our culture to places,” said Dr. Sandeep Marwah thanking everyone on the show.

Sandeep Marwah is the founder of Noida Film City, Marwah Studios, Chancellor of AAFT University of Media And Arts, National Chairman of M&E Committee of BIS Ministry of Consumer Affairs Government of India, President of International Chamber of Media And Entertainment Industry and Chairing 100 more national and international organization to promote art and culture. He  is a case study in number of countries and prestigious institutions.