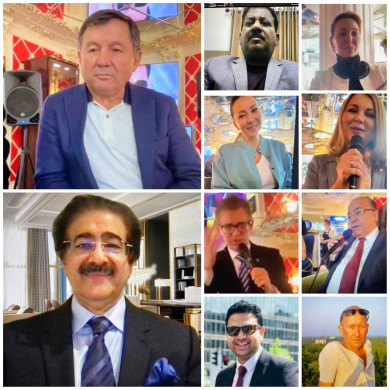 Moscow: “We left no stone unturned to promote relations between two countries India and Russia through art and culture. Indo Russia Film and Cultural Forum is doing very well under the guidance of some of the prominent people of India and Russia since its inception. I also appreciate the efforts of creative people from Russa,” said Dr. Sandeep Marwah President of Marwah Studios and Chancellor of AAFT University of Media And Arts at the function organized by Sergey Dvoryanov the President of the International Diplomatic Club -Amicability online.

Gadzhimurad Omarov – deputy of the Russian State Duma, Irina Volynets – Commissioner for the Rights of the Child in the Republic of Tatarstan, J. ​Bissoondoyal – Minister Counsellor of the embassy pf Mauritius to the Russian Federation spoke on the indo Russian relations and creative arts. The association honored S.R. Vishwanath from Bangalore with prestigious award for his untiring contribution to social work and promotion of Indo Russian relations.

SR Vishwanath is an Indian Politician  from the state of Karnataka . He is in his third term as member of the Karnataka Legislative Assembly  from BJP. He represents Yelahanka Vidhan Sabha Constituency. He is currently the Chairman of Bangalore Development Authority  and Former Political Secretary to the Chief Minister of Karnataka and has been given Cabinet rank status.