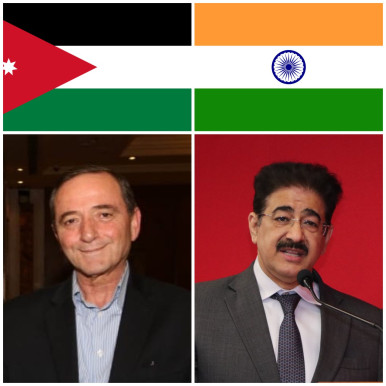 New Delhi: “I on behalf of Indian Media and Entertainment Industry and Art & Culture Fraternity of India take this opportunity to extend my heartiest congratulations to H.E. Mohamed Salam Jameel A. F. El Kayed Ambassador of Jordan to India and people of Jordan on their Independence Day falls on 25st May,” said Dr. Sandeep Marwah President of Marwah Studios and ICMEI- International Chamber of Media And Entertainment Industry.

“It was during Cannes Film Festival when I decided to have a committee on Jordan under the name and tittle of Indo Jordan Film And Cultural Forum to develop and promote relation between the two creative industries. The appreciation also received from Raji Kandalaft of Royal Film Commission of Jordan,” added Dr. Sandeep Marwah also the President of Marwah Studios and founder of Noida Film City.

It was informed that more than 10,000 Indians reside in Jordan. They are primarily employed in textile, construction, manufacturing, fertilizer companies, health care sector, universities, IT, finance and multilateral organizations who all can be informed about this association.