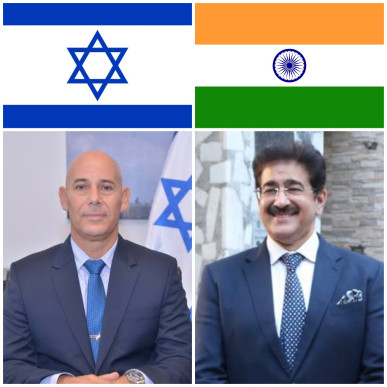 New Delhi: “I on behalf of Indian Media and Entertainment Industry and Art & Culture Fraternity of India take this opportunity to extend my heartiest congratulations to H.E. Dr. Ron Malia Ambassador of Israel to India and people of Israel on their National Day (the Declaration of the Establishment of the State of Israel) falls on 14th May,” said Dr. Sandeep Marwah President of Marwah Studios and ICMEI- International Chamber of Media And entertainment Industry.

“We have wonderful relations with Israel, and it has been quite long that we have created a committee called Indo Israel Film And Cultural Forum to develop and promote relation between the two countries,” added Marwah.

We have been lucky to recently honor two film makers from Israel i.e.  Rani Bleier and Dan Wolman who were presented with Marwah Studios International Award for Excellence in Cinema during 13th Global Film Festival Noida 2020. Earlier many people belonging to the field of art, culture and cinema already been to Noida Film City.We wish a very strong relationship and friendship with Israel.