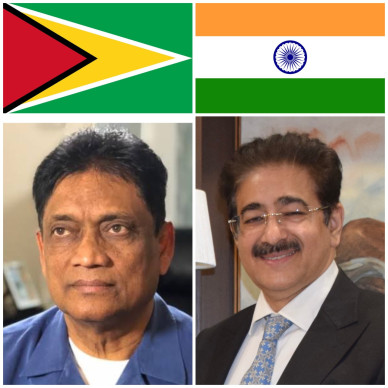 New Delhi: “I on behalf of Indian Media and Entertainment Industry and Art & Culture Fraternity of India take this opportunity to extend my heartiest congratulations to H.E.  Charrandass Persaud High Commissioner of Guyana to India and people of Guyana on their Independence Day falls on 26th May,” said Dr. Sandeep Marwah President of Marwah Studios and ICMEI- International Chamber of Media And Entertainment Industry.

It was way back in 2011 during the World Peace Conference When Dr. Sandeep Marwah met H E Hamilton Green Former Prime Minister Guyana in Seoul, South Korea ,it was decided to create a body to develop and promote relation between two countries through art and culture. Later delegates from Guyana attended many International summits at Marwah Studios in Noida Film City including Global Cultural Summit, Global Peace Summit and Global Literary Festival.

It is important to remember that both the countries India and Guyana were once part of the British Empire . There are approximately 327,000 Guyanese citizens who are of Indian descent.  Indi Guyanese make up the largest ethnic group in Guyana.