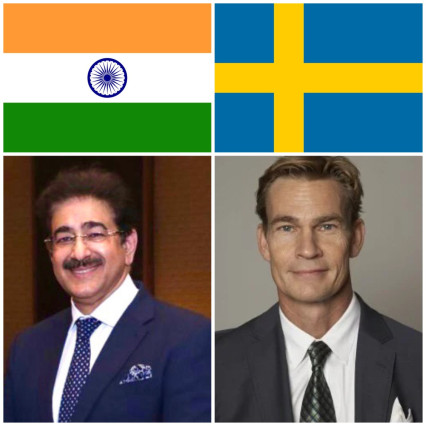 New Delhi: “I on behalf of Indian Media and Entertainment Industry and Art & Culture Fraternity of India take this opportunity to extend my heartiest congratulations to H.E. Klas Molin Ambassador of Sweden  to India and people of Sweden on their Republic  Day falls on 6th June,” said Dr. Sandeep Marwah President of Marwah Studios and ICMEI- International Chamber of Media And Entertainment Industry while sending his best wishes to the Embassy of Sweden.

“It was a great presentation by Elias Wahlund stunt director and CEO of an organization- Creative Minds of Sweden on his visit to AAFT at Marwah Studios Film City Noida. It was followed by a delegation of film makers from Sweden including Csaba Ben Perlenberg the director of the film preparing a docudrama of Indo Swedish story along with lead lady of the film Niki Borgeke, Oscar Aldgard the hero of the film, Chris Maris a senior  cinematographer and Syed Kazmi ,an AAFTian settled in Sweden.

Only recently Dr Marwah had the pleasure to share the dice with Kamal Jabr an academician from Sweden in an International Educational Summit. Indo Sweden Film And Cultural Forum is putting its best to move forward in a big way informed Dr. Marwah.