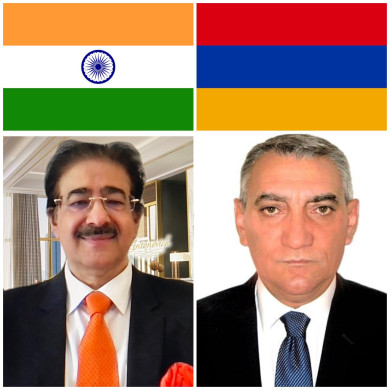 New Delhi: “I on behalf of Indian Media and Entertainment Industry and Art & Culture Fraternity of India take this opportunity to extend my heartiest congratulations to H.E.  Yuri Babakhanian Ambassador of Armenia  to India and people of Armenia on their Independence Day falls on 28th May,” said Dr. Sandeep Marwah President of Marwah Studios and ICMEI- International Chamber of Media And Entertainment Industry while sending his best wishes to the Embassy of Armenia.

Not very long ago we have handed over a scholarship by AAFT – Asian Academy of Film And television to study films in India inclusive of course fee, boarding and lodging to the Embassy of Armenia for the deserving student from Armenia. A festival of films from Armenia is also in the pipe line. Very soon a delegation will be visiting from ICMEI to Armenia to strengthen the relations between two countries through films, media, art and culture,” added Dr. Sandeep Marwah also Chair for Indo Armenia Film And Cultural Forum.