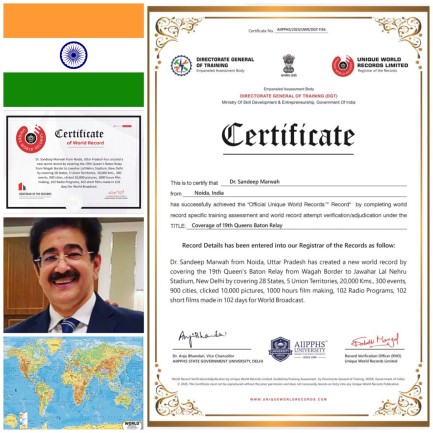 New Delhi: Another unique and extra ordinary contribution of Dr. Sandeep Marwah has been given the approval by the management of Unique Book of World Records and presented the certificate of World Record recently.

We are very happy to note that no film, television, media or sports organization in the Word has so far contributed so much in a such a short period of time this massive contribution to the promotion of sports and media,” said representative of Unique World Records while handing over the certificate to Sandeep Marwah.

The record says that Sandeep Marwah and his team “covered Queens Baton Relay during XXIX Commonwealth Games in 2010 right from the Indian Wagah Boarder to Nehru Stadium the venue for the opening of Games covering 28 states 5 Union Territories, 20,000 Kilometers, 300 events, 900 cities, and clicked 10,000 pictures, 1000 hour of film making, 102 radio programs, 102 short films in 102 days” and created a World Record.

“We are happy that we could contribute so. The additional benefit we received that the 102 short films covering everyday movement of Queen’s Baton were broadcasted in 196 countries for 102 days in prominent news channels. I got the opportunity to be one of the 900 people who walked with the baton to cover the distance of 20,000 KM. The opening film of Games at Nehru Stadium was also prepared by Marwah Studios. 72 students from Asian School of Media Studies were part of the media coverage team during all the days of Games in different stadiums,” expressed Dr. Sandeep Marwah on receiving the award.