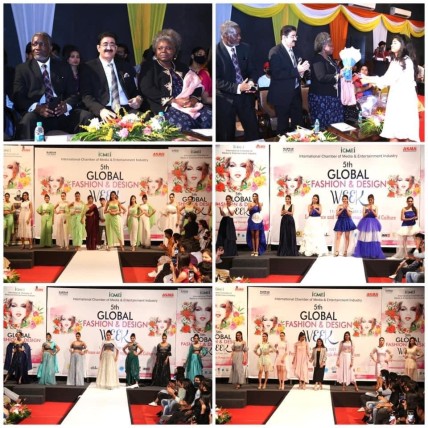 Noida: “Fashion is instant language; Fashion is not necessarily about labels. It’s not about brands. It’s something else that comes from within you, The customer is the final filter. What survives the whole process is what people wear. One should not be interested in making clothes that end up in some  museum. I deeply impressed by the passion of the designers who all have studied and touched so many countries before their final presentations, ”said Sandeep Marwah President of Festival and Marwah Studios on the second day of 5th Global Fashion and Design Week at Noida Film City.

“Success isn’t about the end result, it’s about what you learn along the way. I can imagine the hard work and efforts you all have put in to bring these colorful results in the shape of most creative garments. Clothes are like a good meal, a good movie, and great pieces of music we all have to enjoy with them. I congratulate ICMEI and AAFT for putting up a wonderful show,” said Josephine Patricia Ntyam Ehya Charge d’ Affairs Embassy of Gabon in India.

The designers who all brought enthusiasm and excitement to the show were  Gursimran who presented the range influenced by the flora and fauna from  http://erapa.co.uk/about/attachment/home_a/ Czech Republic, Tanya Chug opted for  aforetime USA, Harshita Singh presented her collection where inspiration was from   nope Egypt, Neha Bhadauria decided from   buy Ivermectin Germany, Akshita range was influenced by  Iceland, Vishakha Kesharwani researched on Czech Republic, Shruti Bhardwaj showed us the collection from Maldives, Anwesha Mishra finalized her collection influenced from Iraq, and other designers from Diploma courses planned  India collection.

Daisy Varun fashion Model and Poet also spoke on the occasion. A dairy was released by the dignities designed by Ayushi Bharti. The event was supported by International Chamber of Media and Entertainment Industry, World peace Development and Research Foundation and International Film and Television Research Centre.