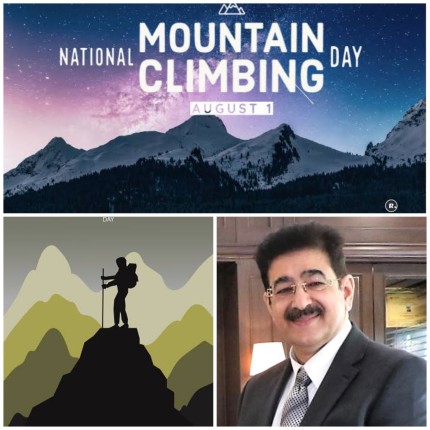 New Delhi: Talking to the students of media at Asian Academy of Film And Television Sandeep Marwah Chancellor AAFT University shared his vast experience of mountains Climbing and importance of the same in a small function at Marwah Studios.

The day was commemorated in honour of mountaineers Bobby Mathews and Josh Madigan. On August 1, 2015, Mathews and Madigan managed to successfully scale all the 46 peaks of the Adirondack Mountains. On this day, they triumphantly scaled the 46th peak, also known as the White Face Mountain. Since then, the day is observed in their honour

“Though I have been to many mountains for climbing including Mussoorie, Nanital,  Pahalgoan, Gulmarg of Himalaya range, Mahabaleshwar of Sahyadri Range, Ooty in South of India part of Nilgiri Mountains of Western Ghats, Jungfrau of Alps in Switzerland but climbing Pindari Glacier was the real fun. The Pindari Glacier   is found in the upper reaches of the Kumaon Himalayas to the southeast of Nanda Devi and Nanda Kot at the height of 12000 ft.