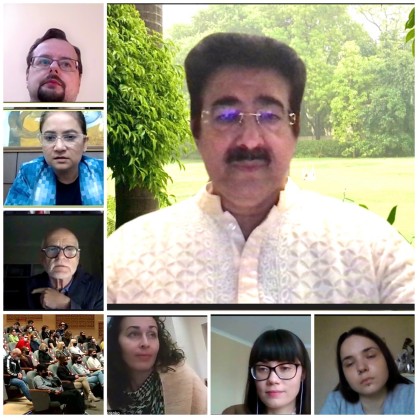 “India and Russia are the best of friends and committed to each other through art, culture and business from a very long time. Many exchange programs have already taken place. I extend my heartiest welcome to the students of St. Petersburg State University of Film & Television to visit Noida Film City and see for themselves how we are organised. I feel happy in presenting scholarship to the University for the deserving student including boarding and lodging for a short-term course,” said Sandeep Marwah while talking in detail about the formation of Noida Film City, Marwah Studios and Asian Academy of Film and Television.

Dr. Marwah motivated the students by telling his own life story and emphasized on the strong determination to carry the film, television, and media business in any part of the World. Dr. Marwah also mention his involvement with Russia as chair for Indo Russia Film and Cultural Forum and his visits to Moscow, St. Petersburg in 2019

Dr Marwah is Patron to BRICS Forum and has entertained many Russian delegations at AAFT, Noida Film City. Later He answered many questions asked by the film students of the University.