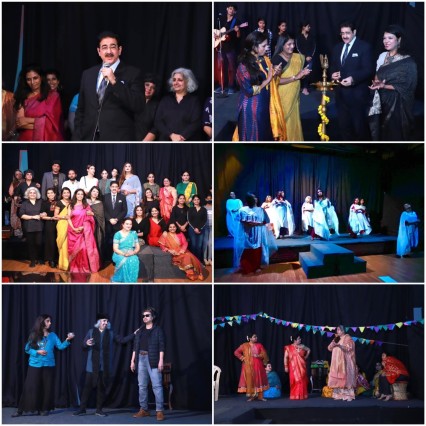 Noida: Theatre is one of the oldest arts of expression. Meaning full theatre has a very large reach, it has a huge impact on the minds of people. I started my career with theatre, and it has added a lot to my personality and thinking. Asian Academy of Arts has been promoting theatre at Marwah Studios and Noida now for a long time,” said Sandeep Marwah President Asian Academy of Arts while inaugurating the play Kyon Nahin? Directed by Anamika Gautam at Marwah Studios, Noida Film City.

“We are, very soon, going to have theatre activities at Marwah Studios on regular basis. We invite theatre groups to come forward and take the advantage of this decision.  The theatre has been created to tell people the truth about life and the social situation,” added Sandeep Marwah.

The play has been produced by Ekk Junoon & Noida Circle of Moms under the presidentship of Shruti Mittal, written and directed by Anamika Gautam. Most of the artists were new and first-time performer. The play depicts the social problems related to third gender. The story is well carved to project the social problem and to deliver the message to the audience. The event was supported by Asian Academy of Arts.