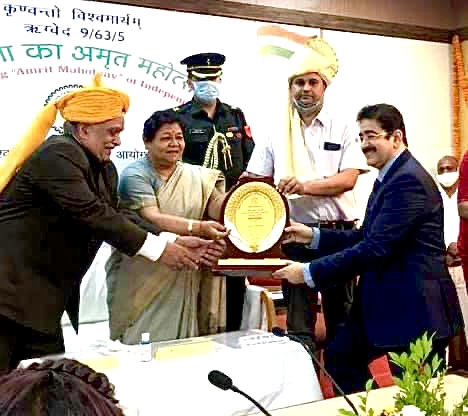 Raipur: “We are looking for the day when students from Chhattisgarh are going to create a wonderful name for the state on the international platform of every discipline. We want the level and the standard of education in the private universities of Chhattisgarh must be maintained to the highest level. Let the students from all over India and other parts of the World join these Universities with great confidence,”
said H.E. Anusuiya Uikey Honourable Governor of Chhattisgarh while inaugurating the new building of The Chhattisgarh Private Universities Regulatory Commission in Raipur.

“The state of Chhattisgarh is concerned about the expansion of educational network including higher education. We want to provide best of the education to our young minds close to their place of living. We have estimated we need more colleges of higher education in the coming months. I want new courses must be introduced to compete with any state in India and abroad,” said Umesh Patel Minister of Higher Education Government of State of Chhattisgarh.

The Chhattisgarh Private Universities Regulatory Commission Olympia  Chairman & First Appellate Officer, Dr Shiva Varan Shukla introduced Dr. Sandeep Marwah to the dignities and talked about the quality of education being parted in AAFT University of Media and Arts, one of the most exclusive universities of the World.

Later Sandeep Marwah Chancellor of AAFT University of Media and Arts was honoured for his untiring contribution to Higher Education by H.E. Anusuiya Uikey Governor of Chhattisgarh in the presence of Umesh Patel Minister for Higher Education in the new premises of  The Chhattisgarh Private Universities Regulatory Commission.

“I am honoured and humbled to receive the award. This is very important to me as AAFT University has been recognised with this extra ordinary reorganization by the first lady of the state,” said Sandeep Marwah thanking Ministry of Education, Government of Chhattisgarh to provide opportunity to serve the state.