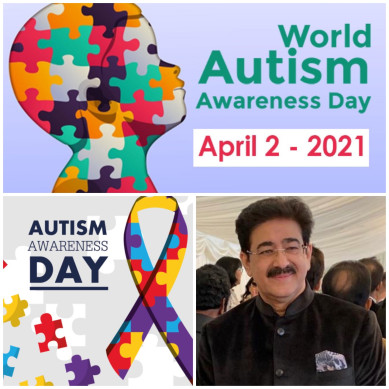 Noida: “Throughout its history, the Marwah Studios family has celebrated diversity and promoted the rights and well-being of persons with disabilities, including learning differences and developmental disabilities. “Koshish -Sahyog” an organization is working towards special children for now many years,” said Dr,. Sandeep Marwah President of Marwah Studios and Chancellor AAFT University talking to members of ICMEI on World Autism Awareness Day at Noida Film City.

“There is a special cell at ICMEI- International Chamber of Media And Entertainment Industry at Marwah Studios to create awareness about disabilities and to sensitize people about the weakness in the society. We have been using our Radio Station Radio Noida 107.4FM and MSTV to broadcast such programs and social messages so that large number of people can understand the kind of support they need to give to these special people,” added Dr. Marwah.

The United Nations General Assembly unanimously declared 2 April as World Autism Awareness Day to highlight the need to help improve the quality of life of those with autism so they can lead full and meaningful lives as an integral part of society.

Autism is a lifelong neurological condition that manifests during early childhood, irrespective of gender, race or socio-economic status. The term Autism Spectrum refers to a range of characteristics. Appropriate support, accommodation and acceptance of this neurological variation allow those on the Spectrum to enjoy equal opportunity, and full and effective participation in society.