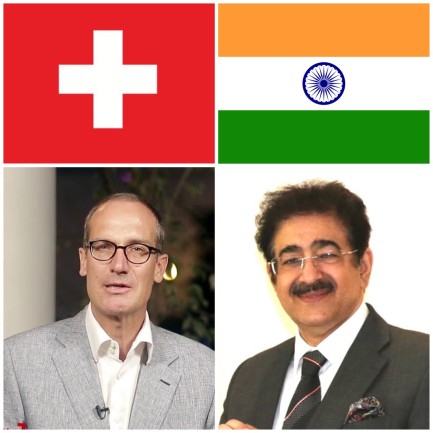 New Delhi: “I take this wonderful opportunity on behalf of ICMEI, Media and Entertainment Industry and complete Art and Culture Fraternity of India to congratulate H.E. Dr Ralf Heckner Ambassador of Switzerland to India and people of Switzerland on their National Day-also known as Swiss Day falls on 1st August,” said Sandeep Marwah President International Chamber of Media And Entertainment Industry.

It was important to have committee on Switzerland in International Chamber of Media and Entertainment Industry u”nder the name and banner of Indo Swiss Film And Cultural Forum. India has very strong and pleasant relations with Switzerland,” added Dr Sandeep Marwah.

Different visits of Sandeep Marwah President Marwah Studios and ICMEI to Geneva, Zurich and Lausanne added a lot to the relation between the two countries. “it was great to see a Bollywood Restaurant at the heights of Alps mountain in Switzerland, was a unique pleasure. The country   always been a part of Indian Cinema,” added Sandeep Marwah.

Later the visit of Markus Luedin rector of Kantonsschule Menzingen from Switzerland accompanied with Christol Konig Beatty From Department of Physics and Maths enhanced the Indo Swiss participation and supported in developing and promoting relations between the two countries.