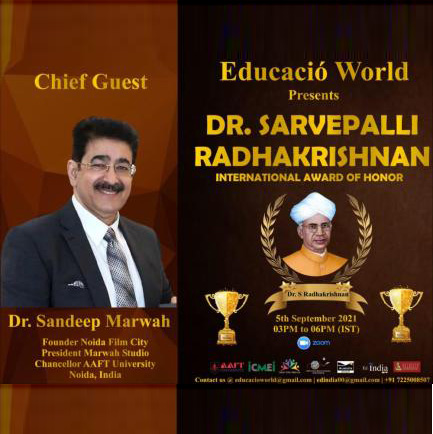 New Delhi: “Please do not forget India was the World capital of education and had offered to the World Universities like Nalanda, where overall development of the child used to take place. Where all we have gone wrong. In the process of attaining higher marks we have diluted the real  upliftment of human being in these Universities,” said Dr Sandeep Marwah Chancellor of AAFT University of Media and Arts talking in the capacity of Chief Guest to the awardees, teachers  from schools and colleges of different countries in a webinar designed by Fareen Khan of Educacio World.

“The education must bring excitement to the student as well as to the teacher. It should be planned in the most entertaining way. The education should bring development in the child and also develop the strong determination and dedication in the nature of student. Keeping in mind the Sustainable Development Goals as propagated by United Nations, learn to teach optimum in the most economical manner within the given resources of the establishment,” added Dr Marwah.

Later Dr Marwah was presented with Sarvepalli Radhakrishnan International Award 2021 for being a case study in 27 Countries of the World. AAFT education has been also a case study while formulating New Education Policy of India. Dr Marwah has created seven World Records in film, television and media education.