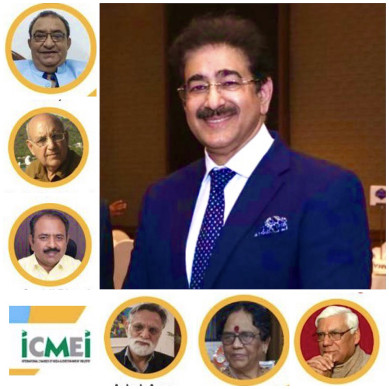 New Delhi: Another seminar was planned by the WAI- writers Association of India with some of the most prominent writers talking and expressing their views on the interesting and serious topic like Commercial Transparency in Literature World on web.

“Writers association of India has been created to help and support new & established writers. We have been producing short films on short stories by differ rent writers to promote them in films and media World. Association has been  conducting large number of workshops, seminars, interactions, talks, symposiums, anniversaries  of renowned writers and festival. Popular and powerful awards  have already been constituted under the name of Dr Sarojini Naidu, and late prime Minister of India Shri Atal Bihari Bajpayee. The association has conducted ample Kavi Sammelans / Kavya Goshthi’s to support literature of India,” initiated Dr. Sandeep Marwah President of Writers Association of India and Chancellor AAFT University of Media And Arts.

Renowned writer and Lawyer Ashok Arora said Writing is a great hobby, but it can be a tough profession to earn money from. Besides, you must be exceptionally good at writing to make a living from it. “Writers get better by writing a lot. So instead of going for “full-time author” straight off the bat, pick a job or work as a writer in other shapes and forms. Let’s call this commercial writing,” Dr. Rama Singh poetess and veteran teacher.

“Some of the magazines also pay for the write-ups which include essays (Trending news and various topics), book reviews and other important topics which need coverage. As they say, a pen is mightier than the sword. By writing op-ed, you can actually write about things you truly care for – try to be the change you want to see in the world,” said Ashok Tyagi well known Film writer &  director and Secretary General for ICMEI.

“Writing for magazines, blogs eyc. is one of the ways to write articles and earn money in India. This also helps you build credibility as a writer because when you finally pitch your work to a publisher, you will have lots of writing visible online with your name on it,” added Dr. Divik Ramesh senior poet and writer.

“A job in publishing can be a great learning experience. The tips and tricks of the trade that you will learn while doing so, can also be helpful when your book is ready. You can then finally turn your dream of being a published author into reality and utilize all this information by practically applying it all,” expressed Dr. Pratap Sehgal

The program was conducted by Dr. Sushil Bharti Director Broadcasting- Radio Noida of Marwah Studios. The event was supported by ICMEI- International Chamber of Media And Entertainment Industry, AAFT University of Media And Arts and WPDRF- World Peace Development And Research Foundation.